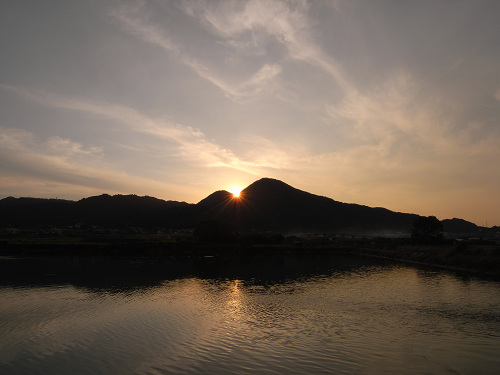 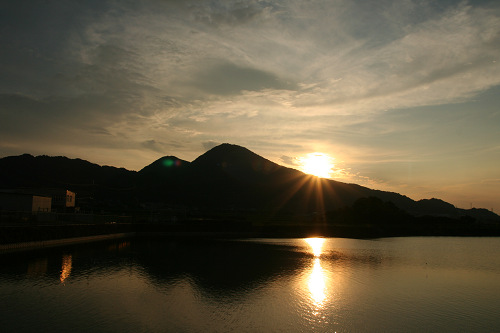 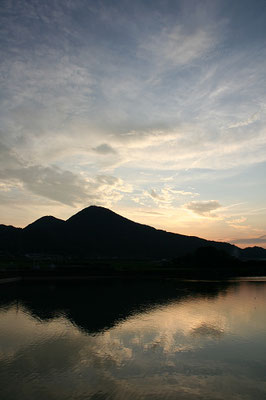 Chimata-ike Pond is known as one of best photo spots in Kashiba City. On equinox days, you can see the sun going down exactly between two peaks, Odake (male peak; 517m) and Medake (female peak; 474m), of Nijo-zan Mountain. Thus, Nijo-zan has been admired as a holy mountain since the ancient times.

The photo above was taken on August 19, so you can see the sun going down far from the peak to north.

This is the sunset of September 28.

Best time for photo-taking is around 17:00

Here are some information for photographers:

  From Chimata-ike Pond, the best timing to take photos is around spring and fall equinox days. The photo above was taken on September 28, which was few days after the fall equinox day, but I moved to the farthest north of the pond so that I could see the sun going down just into the middle. By changing your position, you can move the point of sunset.

  It is quite early that the sun goes down to Nijo-zan Mountain. On September 28, I started to take photos from 17:00 and already five minutes later, the sunset was over.

  As the sun goes down at the height of Nijo-zan Mountain, the sky doesn’t turn red yet. It is about 30 minutes later so be patient a bit more to see colored sky.

This photo was taken at the start of sunset. On the day of no wind, you can see the sunset reflected on the water.

Koshioreda, where it is believed Taima no Kehaya and Nomi no Sukune tested their strength against one another, which is the origin of sumo wrestling.

This page was prepared referring to the article of 奈良ローカル通信 dated on August 19, 2011 and September 25, 2011. All photo are also from these pages.